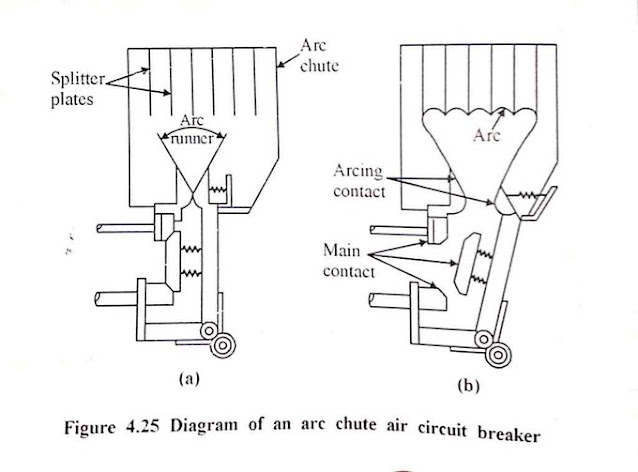 This can be done in the following way:

1. Intensive cooling of the arc plasma, so that the voltage gradient is very high.
2. Lengthening the arc path to increase the arc voltage.
3. By splitting up the area into a number of series of the arc.
The principle of operation of these breakers is based on the high resistance method. They are an interruption in oil that takes place due to hydrogen gas generated by the decomposition of oil. The are interruption properties of hydrogen gas are much better than -the air, but the air has several advantages as an arc extinguishing medium as compared to oil.

The following distinct merits of air over oil while interrupting the are:

Therefore except for a certain medium range of voltages, air circuit breakers are commonly used for low voltage circuits as well as the highest transmission voltages.

The popular type of air circuit breaker (ACB) is are chute air circuit breaker. These breakers usually have two pairs of contacts per phase. The main pair of contacts which are made up of copper carries the current under normal operating conditions. The additional pair becomes the arcing electrode as the circuit breaker is opened and is made of carbon. The repolarization and distortion of the contacts due to the heat of the are confined to these contacts. Therefore the materials required for these contracts should be nonvolatile. The main contacts separate while the arcing pair is still in contact. Hence the arc is initiated only when the arcing pair get separated.

In arc-chute ACB, the arc is extinguished by applying the principle of lengthening and increasing power loss.

Figure 4.25 explains how the arc discharge moves upward with the help of the effects of both electromagnetic and thermal. These are discharges are then directed towards the chute. The chute consists of splitters and baffles. Baffles improve cooling while splitters lengthen the arc. The splitters increase the length of the are even further. In this breaker relatively high in arc resistance is obtained near current zeros. This effect plays an important role in obtaining high breaking capacity by modifying the circuit power factor near current zero such that the voltage available to restrike the arc is less than the p peak value.