Miniature circuit breakers are only used at LV, mainly in domestic or height-industrial or commercial applications. In general, they are used in the same application: as semienclosed or cartridge fuses and offer an alternative for protecting radial 01' ring circuits. They are usually only single-phase devices and have a typical rated load current range of up to 100 A with a maximum short-circuit rating of 16 kA at 240 V. Manually operated over-center spring operating mechanisms are used. Miniature circuit breakers usually employ a series overload coil for rapid short-circuit tripping and a bimetallic element for tripping on overloads. All miniature circuit breakers operate on the air-break principle where an is formed between the main contacts is forced, by means of an arc runner and the magnetic effects of the short-circuit currents, into metallic arc splitter plates. These cause a number of series arcs to be formed and at the same time extract energy from the arc and cool it to achieve arc extinction. With some designs of the Miniature circuit breaker, this is interruption process can be so rapid that the current cut-off can be achieved in much the same way as described for a current-limiting fuse. The principle of a typical miniature circuit-breaker is shown in figure 4.26. 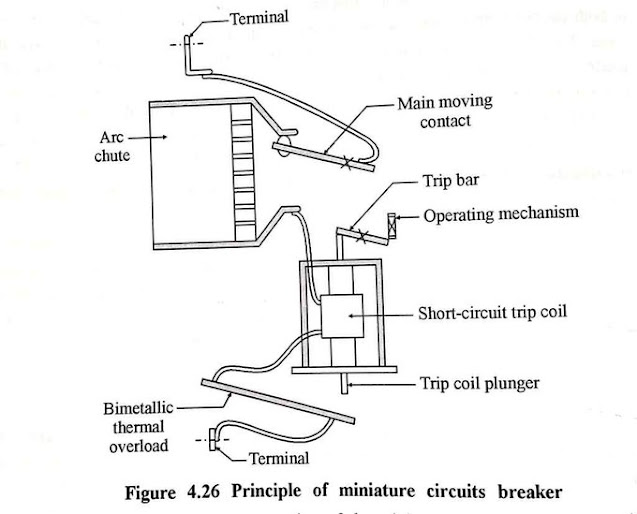 Miniature circuit breakers do not, however, provide rapid operation for low values of earth leakage current. Modern-day wiring regulations require that very rapid operation is achieved in the event of an earth fault to minimize the dangers from electrocution. This requires operations for earth fault currents as low as 30 mA in a time of some 2-3 ms.

A variation on the basic construction of the miniature circuit breaker is used to achieve this requirement. Such a device is commonly known as an ‘earth-leakage circuit breaker’, although the correct terminology is ‘residual-current device’. Tripping at such low values of earth leakage current is achieved by passing both the feed and return conductors through an internal current transformer. Under normal conditions, the resultant flux in the current-transformer core is zero. Under earth-fault conditions, the feeding and return currents will not be of the same value and the current difference causes the flux to be generated within the current transformer core producing an output voltage at its secondary winding terminals which are used to energize the tripping circuit of the residual current device.

The residual-current device may be permanently wired into an installation or used as plug-in devices to protect domestic electrical appliances.

One feature of the miniature circuit breaker and the residual current device is that their contacts are not maintainable and after a limited number of operations replacement of the device may be necessary. However, in practice, this is seldom a significant limitation, and eroded contacts can usually be detected by overheating causing nuisance tripping of the device.