In trickling filter, sewage is allowed to sprinkle or trickle over a bed of course, rough, hard filter media and it is then collected through the under drainage system. Spray nozzles or rotary distributors are used for this purpose. The biological purification is brought about mainly by aerobic bacteria which form a bacterial film, known as biofilm, around the particles of the filtering media,Though, trickling filter is classified as ah aerobic treatment device, the microbial film the slime layer formed on the 111ter medium is aerobic to a depth of only 0 1 to 0.2 mm and the remaining part of the 111m 18 anaerobic. 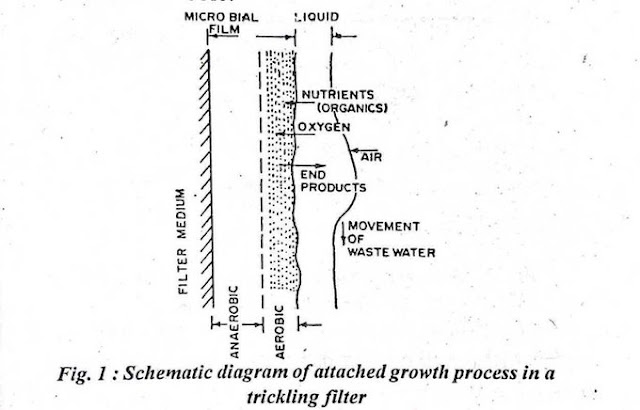 As the wastewater flows over the microbial film, the soluble organic material in the sewage is rapidly metabolized while the colloidal organics are adsorbed onto the surface. In the outer portions of the biological film, the organic matter is degraded by the aerobic microorganisms. Since 00d concentration is higher at the outer ' layer, the micro-organisms near the outer surface are in a rapid growth phase. As the micro-organisms at the outer surface grow, the thickness of the slime layer increases and the diffused oxygen is consumed before it can penetrate the full depth of the slime layer. Hence the lower zone of the film is in a state of starvation due to which anaerobic environment is established near the surface of the media. As a result of having no external organic supply out there for cell carbon, the micro-organisms close to the media surface enter into an endogenous part of growth and lose their ability to hold the media surface. Eventually, there is scouring of the slime layer due to flowing liquid and a fresh slime layer begins to grow on the media. This phenomenon of scouring of the slime is called sloughing or unloading of the filter.