Holography is a technique employed to make three-dimensional images. The size of the object can range from large cars to small particles on the micrometer scale. Holography originates from the work of the British/Hungarian scientist Dr. D. Gabor. He tried to improve the resolution of his electron microscope in 1947, using a mercury arc lamp, the incoherent light source resulted in distortions in his images. These images he called holograms after the Greek words “holos” means “whole or entirely” and “gram” meaning “message or recording”. He developed a technique by which three~ dimensional image of an object can be recorded and reconstructed by a wavefront construction device with the help of a highly coherent laser beam, which is known as Holography. The recorded transparent photographic plate is named Hologram. 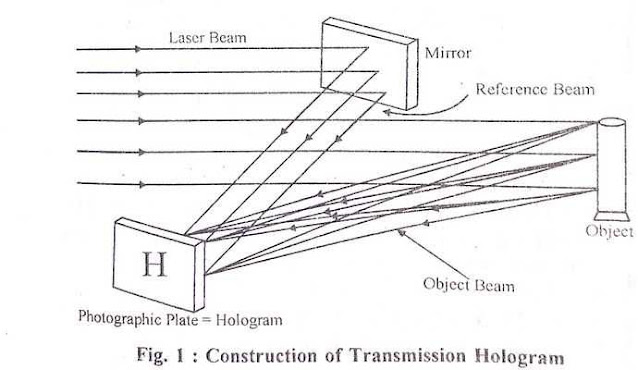 Holography is the process of recording a wave on square law medium and later releasing the same. A wave can carry information in the form of the modulation of amplitude, phase, and polarization. This information can be stored using holography. Its revival cone with the advent of the laser. Since then it has found applications in almost all branches of science, technology, and engineering.

To record a hologram of a complex object, a laser beam is first split into two separate beams of light using a beam splitter of half-silvered glass or a birefringent material expanded by a lens, as we need two coherent light waves to make a hologram.

Step I: Construction of Recording of Hologram:

Since both amplitude and phase information is to be recorded on media that responds to energy, we resort to interferometry. A coherent wave, called the reference wave, is added to the object wave at the plane of recording. The reference wave is usually either a spherical or a plane wave. Both amplitude and phase variations have been converted into irradiance variations to which the recording medium responds. The processed photographic record is called the hologram. Hologram recording involves the phenomenon of interference and hence, all the conditions necessary for obtaining high contrast fringes are on interference pattern must be fulfilled. A typical hologram recording geometry is shown in Fig.2.

To release the object wave from the hologram it is illuminated by a reference wave. Different perspectives of the object are seen when it is viewed through different regions of the hologram. Reconstruction ‘ involves the phenomenon of diffraction. The fine structure on the hologram created by interference diffracts the incident wave. Therefore, the conditions of monochromaticity and coherence are considerably relaxed.