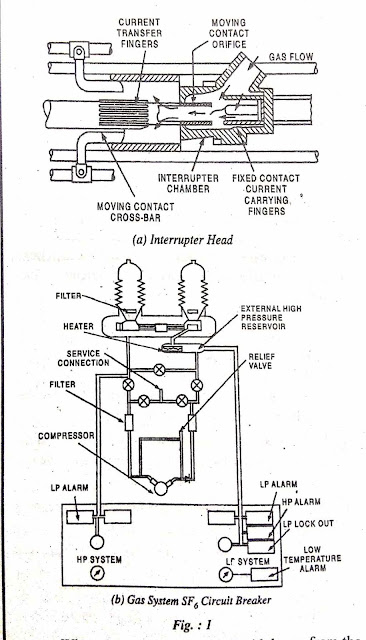 What is SF6 Gas

The gas costs less if manufactured on a large scale. The gas is transported in liquid form in cylinders. Before filling the gas, the circuit breaker is evacuated  40 the pressure of about 4 mm of mercury so as to remove the moisture and air.  The gas can be reclaimed by the gas handling tank.

Such a circuit breaker essentially consists of two parts, namely

(1) The interrupter unit and

(i) The Interrupter Unit:

This unit consists of moving contact and fixed contacts comprising a set of current-carrying fingers and an arcing probe. In the 'élose position of the breaker, the fingers make contact around the circumference of the moving contact having the arcing probe enclosed within its hollow end.

The contacts are surrounded by interrupting nozzles and blast shield to control the arc displacement and the movement of the hot gas. The moving contact is in the form of a hollow nozzle sliding in the second set of spring-loaded fingers.

The closed-circuit gas system [F ig.l(b)] is employed in SF6 circuit breakers. Since the gas is costly, it is reconditioned end reclaimed after each operation of the breaker. A necessary auxiliary system is provided for such a purpose.

The low and high-pressure systems are provided with low-pressure alarms and a set of lockout switches that give a warning the moment the gas pressure drops below a certain value,.failing which dielectric strength will be reduced and are quenching ability of the circuit breaker will be endangered. On reaching the danger limit the safety devices immobilize the breaker.

I presume you're talking of the second type. It simply means it's not safe for the breaker to open under the prevailing conditions. It might be Low pressure within the case of SF6 type CBS, for instance.

In most of the cases, it's safe for the breaker to open on normal load current but not on fault, because the pressure isn't adequate for effective interruption of fault current and to stop restrike.

There is always an alarm stage before the CB goes for lockout. The alarm stage is meant to be taken seriously and schedules the isolation of the CB at the earliest, to research the explanation for low and rectify, or to exchange the CB with a spare one.

The culture of ignoring Alarms if prevalent does more harm and wishes to be addressed.

If lockout doesn't come correctly at low-pressure conditions, there could also be huge arcing within the CB contacts during operation. thanks to this, the CB may blast out with the collapse of the facility system.

So, we will understand how important is the lockout scheme of an SF6 breaker.

This breaker uses SF6 or sulfur hexafluoride as an arc quenching or arc extinguisher medium. Although SF6 has excellent dielectric properties. But just like the minimum oil breaker, the SF6 CB only utilizes the extinguishing property of the SF6 gas. Since this page is about the upkeep of the SF6 breaker, allow us to attend to the subject directly.

The main problem with an SF6 breaker is its leakage. An SF6 breaker may suffer from a gas leakage problem. due to that, the pressure of the gas inside the extinguisher chamber decreases.

The arc quenching capability of the breaker may deteriorate if the pressure of the gas decreases. So to avoid this, regular checking of an SF6 CB, for SF6 leakage is sort of necessary.


Oil, an obviously inflammable substance for extinguishing the hot arc, is a well-proven medium because it releases hydrogen which by virtue of its low mass and high velocity is an excellent cooling medium. But modem circuit breakers employ heavy gas SF6 as the medium for quenching the arc. SF6 gas, because of its excellent dielectric, arc quenching,  chemical, and other physical properties, has proved its superiority over another medium such as oil, or air for use in circuit breakers. Several types of SF6 circuit breakers have been developed by different Manufacturers during the last three decades for rated voltages 3.6 to769kv.