The Klydonograph to the measurement of voltages-surge on transmission lines. Klydonograph is placed directly on the line.

It Is consists of around electrode resting on the emulsion side of photographic plates. Klydonograph Diagram shown in Figure (2.25). 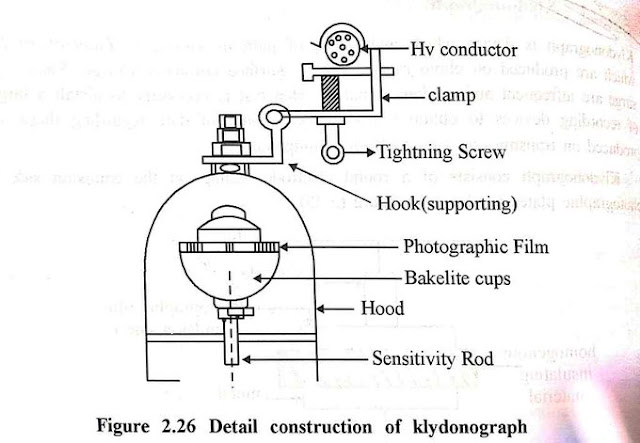 It has been used in the past quite extensively for providing statistical data on the magnitude, polarity, and frequency of voltage surges on transmission lines even though its accuracy of measurement is only of the order of 25 percent.

Various parts of the Klydonograph

The recording unit houses the photographic film in a light-proof chamber. The unit consists of two bakelite cups which can be screwed on. A circular bakelite plate is placed between the cups on each side of which the photographic film is placed with the emulsion facing out. The bakelite cups are coated with conducting paint in their inner surface to provide a well defined electric field which increases the accuracy of the measurement.

The coupling hood provides for voltage division of the surge to the ground at the h.v. end. Due to the capacitance between the hood and sensitivity rod, a small portion of the surge voltage appears across the conducting layers on the bakelite cups.

A metallic cylindrical rod screwed to the bottom bakelite cup. The length of this rod controls the magnitude of the voltage across the klydonograph.

The supporting hook supports the hood and the recording unit and connects them to the high voltage conductor.

It is a relatively simple and cheap instrument and has been very useful for determining data regarding magnitude, polarity, and frequency of voltage surge on the transmission line. Its accuracy is of the order of 25% to 50%.