In this scheme carrier currents of the high-frequency range are transmitted and received with the help of transmission lines for protection. 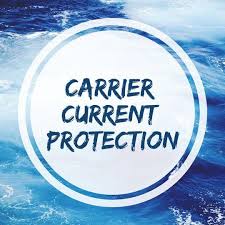 Carrier signal of frequency range 50 kHz to 700 kHz is used in this scheme, because below this range, the size, the cost of coupling equipment becomes high and above this range, signal attenuation and transmission loss is considerable.

Upon the occurrence of a fault either in the protected section of the line or in a nearby section, non-directional fault-detector relays are actuated at each line terminal through which power is fed to the fault. Each fault detector relay turns on the carrier current transmitter at its own terminal. If the directional relay at any terminal shows that the fault power is flowing into the protected line section, that relay will tum off the carrier current transmitter. The presence of a carrier on the line serves to block tripping at all terminals. For an external fault, power will flow out of the line at one terminal and a carrier signal transmitted from the terminal will prevent the tripping at the other terminals, where power is flowing in.

On the other hand, for an internal fault power will usually flow into the line from all terminals, which results in the turn off of all carry transmitters, and the relays at all terminals will trip simultaneously. The carriers are transmitted only upon the occurrence of a fault and are used only to prevent tripping in the event of an external fault. Therefore, the possible short-circuiting of the carrier channel by an internal fault cannot block the operation of the relays to clear the fault.

In situations where there is no communication between circuit ends, a comparison between relative phase angles is often possible. The most widely used protection of this kind is the phase comparison carrier current protection system in which alternate half cycles of the current of each end of the protected circuit are modulated with a carrier signal and transmitted over the power line.

Normally, the phase angle between the currents at both the ends of the protected \ine will be such that the comparator is inoperative (i.e., the phase displacement is 0°) whereas for an internal fault the angular displacement will be nearly 180°.

The schematic diagram outputs of the phase comparison are shown in figure 3.6. If the current are in phase, there will be no fault in the protected section. If two currents are 180° out of phase, a fault in the line is indicated.

A carrier frequency, both transmitter, and receiver are connected to the power line and are insulated from the ground.

Through the coupling capacitor, half-cycle blocks of carrier signals are injected into the transmission line. Fault detectors are also installed in the lines so as to control the carrier Signal. Fault detectors Operate only during faults.

Two stations A and B having a voltage output of the summation network of 180° out Of Phase during normal conditions as shown in figure 3.6. This is because of the reason that the CT. connections at the two ends are reversed. The transmission of the carrier signal takes place only during a positive half cycle of the network output.

The advantage of carrier current protection is following as